The Fabulatory is a Creative Lab specializing in product design, animation design, logo design, graphic design, web design, environment design, tradeshow design, illustration and marketing. Under the leadership of A.J. Dewey’s 24+ years of award-winning Art and Creative Direction, we specialize in turning your brand and ideas into full-blown conceptualized and successfully developed consumer experiences. Because we have worked in so many industry categories, we have the experience to bring fresh ideas into new markets - as stale ideas really get our beakers in a bunch…because FABULOUS. 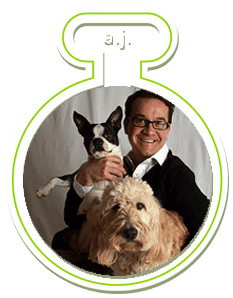 Currently, as the Art & Creative Director of The Fabulatory, he's able to bring his vast design experience from many different industry categories he has worked deeply within - fresh, innovative first-to-market brand experiences and products to fruition and beyond– and he is excited to do so.

A.J. Dewey began his career at the age of 10 as a child actor for America's premier equity multi-generational theater, the Tony Award-winning Children's Theater Company of Minneapolis (CTC). Spending nearly ten years as one of the handful of children continuously cast in CTC's elaborate productions, A.J. was continuously working with some of the biggest names in children's literature - Dr. Seuss, Astrid Lindgrin, and Tomie dePaola - to name a few. In 1992, A.J. attended film school at Columbia College in Chicago where his student film won Best of Class out of the 250 films submitted.

In 1994, Dewey formed A.J. Dewey's Creature Kumpany. A.J. launched the company by writing and producing an elaborate musical production of The Velveteen Rabbit that featured 48 handcrafted puppets, eleven puppeteers, and four actors. A hands-on creator, A.J. was involved in every aspect of the production, from raising money, to the design and construction of all the costumes, puppets, and sets. The show opened to sold out houses during its 50-performance run. Earning critic's choice in both the Minneapolis Star Tribune and the St. Paul Pioneer Press, it inspired the Minneapolis Critic Peter Vaughn to conclude in his review of the show, "My guess is we will see a lot of him [Dewey] over the years."

The success of the show earned A.J. a steady base of freelance clients for which he immediately began designing and developing many projects for in mediums that included print, television, and product design. Dewey was hired by Houston based Luna Entertainment to help develop and design an original television concept based on an unpublished work of Margaret Wise Brown entitled The Noon Balloon. A.J. designed print characters for Mello Smello, a national children's marketing company, built some props for Lee Jean's Buddy Lee character and designed some wardrobe pieces for Rebecca's Garden, a national cable television series on gardening. In 1997, A.J. worked in the Art Department of Tremendous Productions where he designed and built props, original artwork, and served as assistant puppet wrangler for 26 episodes of Once Upon a Tree, an award-winning cable series produced for Animal Planet and PBS.

In the fall of 1997, A.J. joined Interactive Personalities, one of the countries leading producers of corporate presentations for Fortune 500 companies. Here A.J. designed characters and visual concepts for such companies as IBM, Compaq, Cincinnati Bell, Disney, Starkist and Whirlpool. In 1998, A.J. was selected to design the animated spokesperson for the American Advertising Awards. Then in 1999, A.J. was named the Creative Director and made partner of a new division of Interactive Personalities entitled eMotion Capture Studios. The new division would focus on the creation and development of children's and family live-action and animated broadcast projects. Immediately eMotion Capture Studios was chosen by the MN Orchestra and the Dr. Seuss Estate to produce a nationally distributed symphonic animated video of the popular children's book Dr. Seuss's My Many Colored Days. A.J. was selected to design all the animated characters and hand-paint all the animated backgrounds for the video. As Dr. Seuss never illustrated this story himself, Dewey was assigned to create artwork that was not derivative of Seuss's own work - but was to be created purely in Dewey's own unique art style. Dr. Seuss's My Many Colored Days was released in 1999, and won a total of 16 national awards and recognitions.

Dewey established his newest company, The Fabulatory, in 2001. The company's mission is to design and produce FABULOUS products for print and multi-media applications. Through The Fabulatory, A.J. has created hundreds of products for the mass and specialty markets that include: Target, Wal-Mart, Marshall Field's, Nordstrom, Creative Kidstuff and Barnes and Noble. In addition to creating products from his own original artwork, A.J. also developed artwork and licensed product for Sesame Street, Cat in the Hat (movie), Marvel, Betty Boop, Madeline, Groovy Girls, Peanuts, American Chopper and Pepsi Cola.

From 2004-2006, A.J. was a Senior Designer at Manhattan Toy. A.J. was the lead designer for the company's biggest initiatives that were released at Toy Fair in February of 2006. The first big initiative was a brand extension of their ever-popular Groovy Girls line. Dewey created a separate line of dressable pet plush that includes outfits and over-the-top accessories for a menagerie of fabulous furry pets, Groovy Girls Petrageous. A.J. was also the lead designer on Manhattan's second biggest initiative, and created the first ever rooted hair, molded plastic fashion dolls for the specialty market. The line is based on pixies from an imaginary world called Trixieville...a secret pixie place. Groovy Girls Petrageous was the most successful initial launch in the company's history. In 2006, Manhattan Toy collaborated with Cirque Du Soleil to develop a premier collection of toys that would celebrate Cirque Du Soleil's creative spirit, promote self-expression and delight and inspire imaginative play. A.J. not only designed toys for the collection, but also developed most the custom printed fabrics as well.

In 2006, A.J. was hired by The Moodster Company as it's Creative Director to help create, design, and direct a 3D animated pilot for a potential series. The pilot completed production in June 2007.

From 2007-2010- A.J. worked exclusively for this fabulous company(!) - The Fabulatory – for the clients listed on this site – until he was enticed by an offer he couldn't refuse ...

2010. A.J. was hired by PM&J/Wuxi Jinmao as it's Creative Director. PM&J is a Chinese owned vertical textile manufacturer of Pet Beds. PM&J is it's US office that manages their US private label pet bed programs for companies such as Target, Petco, Menards, Gander Mountain, Shopko and Kohl's. During A.J.'s time at PM&J/Wuxi Jinmao – A.J. was a part of a small team of three that grew to a team of ten three years later – and also grew the company’s sales by 12M! In 2012, A.J. became one of the only designers outside of Target approved to design for Target's private label "Boots & Barkley" program – and PM&J was chosen by Target as a "Vendor of Excellence" and "Joint Business Partner" during each of the three years A.J. was employed at PM&J/Wuxi Jinmao.

In 2013, A.J., not even being an alumni, was surprised and honored to be selected by The University of Minnesota as one of 7 speakers chosen to give a speech at their annual "Design in 7" event – each speaker representing one of 7 different schools of design. A.J.'s speech represented product design. http://design.umn.edu/alumni_friends/d7/

Also in 2013, A.J. left PM&J to launch his latest effort, Pawabunga! LLC (later to Become Animaganza LLC in 2018)– an innovative pet products company. The company has quickly exploded in growth and is already shipping product throughout 10 countries, hundreds of retailers, is a regular on ShopHQ and major catalog companies such as Dr. Fosters & Smith, Hammacher Schlemmer, Orvis and Plow & Hearth. In March of 2014 – NBC's The Today Show chose Pawabunga's product, Banadana Bowls, as one of their top 4 favorite products - among the millions exhibited at the "Super Bowl" of pet tradeshows, Global Pet. Since the launch of Pawabunga and Animaganza – A.J.’s designs have been awarded 6 US patents.

In early 2018, A.J. sold his ownership of Animaganza to Pet Product Innovations – so he could get back to doing what he loves to do best…creating some Fabulous within his Fabulatory – and he is excited to do so.

a little Dewey did it... 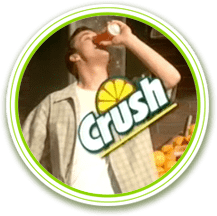 During the days A.J. worked as an actor - he was featured in several television commercials, print and industrial films. for Orange Crush was one of them… that look 12 hours to flim...because A.J. flinched every time the director called "ACTION"... for obvious reason...(0.32 mins) 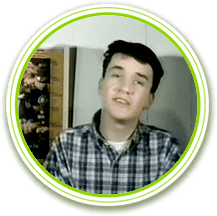 A.J Dewey owned and operated his own pupperty company in his early 20's. The company produced its own musical theater adaptation of "The Velveteen Rabbit" in 1994. The production received critic's choice in 4 major newspapers in Minneapolis during it's 50 performance run-including the the...(4.19mins) 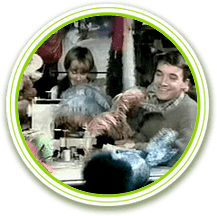 (cont) Minneapolis Start Tribune and the St.Paul Pioneer Press. A.J. wrote the show's book and lyrics, designed the puppets, costumes, sets and directed the production. This documentary was created by a film student, Charles Hubbell at the University of Minnesota for a documentary assignment.(3:08 mins) 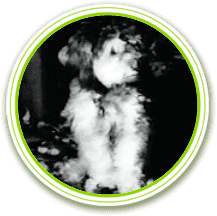 "Doggy Style" was A.J.'s first student film created while he attended film school at Columbia College. This film was a silent black and white film shot on an antique hand-crank camera. The sound was thrown in later- the film was not edited to the sound. This film won Best of Class out of 250 films submitted. (5:31 mins) 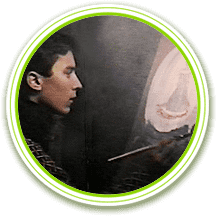 "Snowmen" was A.J.'s second student film created while he attended film school at Columbia College. This was the first film A.J. was able to work sound into. Each sound effect was individually recorded by A.J. and edited into the film. None of the sound was recorded "live". This film received runner's-up in Best of Class out of 250 films submitted. (4:41 mins) 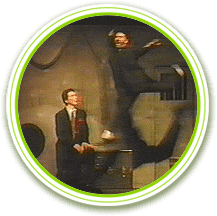 A.J. Dewey played Moonface Martin in Benilde-St. Margarets High School production of "Anything Goes". While A.J. had performed in many professional theater productions previously, this high school production was one of his favorites. A.J. improvised his own choreography for this performance each night - can you tell)(3:55 mins)